This was our tiny kitchen in Baltimore.  We had very limited counter space and our appliances took up much of the space.  We used a table and stools for some extra space in our kitchen.  And the kitchen was completed by my finance’s “man cave” sign above the sink.  I always would tease him and tell him that “I guess that means that I don’t have to do any of the cooking or cleaning”-this didn’t end up happening haha.

In our current apartment, we have a different color scheme.  I love the black and white colors with stainless steel appliances.  We have used the same “mangia” red italian kitchen towel to decorate our stove area.  We have used red accent colors to jazz up our kitchen.  I used a cheap spice rack from The Container Store to put up on our only small wall to house all of our spices.  I have a great recipe book holder, coffee maker, toaster, and KitchenAid mixer from Bed, Bath, and Beyond.  Also, I was able to find a cheap fruit holder from HomeGoods to hold bananas and other fruit.  My favorite part of this kitchen is my olive oil container on the stove-it is SO useful when cooking dinner!  It is also from Bed, Bath, and Beyond.

Ok, so anyone who has moved knows how challenging and overwhelming adjusting to a new space can be.  When I moved in with my husband in Baltimore (fiance at the time), we had NO SPACE to work with.  So these are some of the ways that I have saved money and created space. 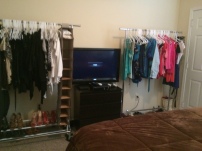 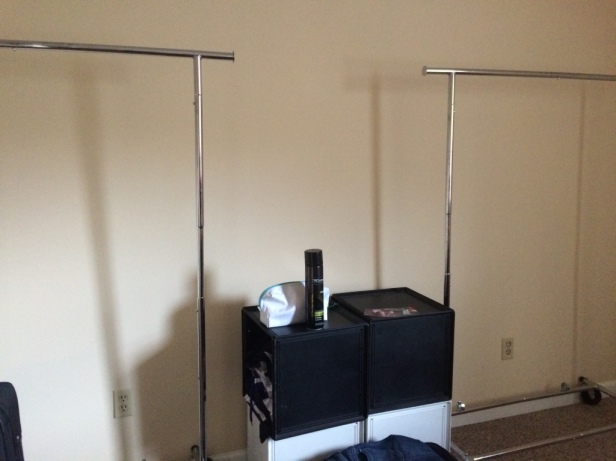 2.  One bathroom problems-so anyone who has lived in a one bathroom space with a roommate/significant other knows that the competition of getting into the bathroom is real!  Ladies, use a vanity-this frees up the bathroom and allows you to get your own relaxing space to get yourself ready for the day.

3.  No bathroom space-buy a cheap organizer for over your toilet.  This creates extra storage in your bathroom.

4.  Tiny laundry area-organize my laundry space, I was able to snag a tiny paper organizer that my mom used to use in her classroom to save space and keep my detergent, dryer sheets, etc. 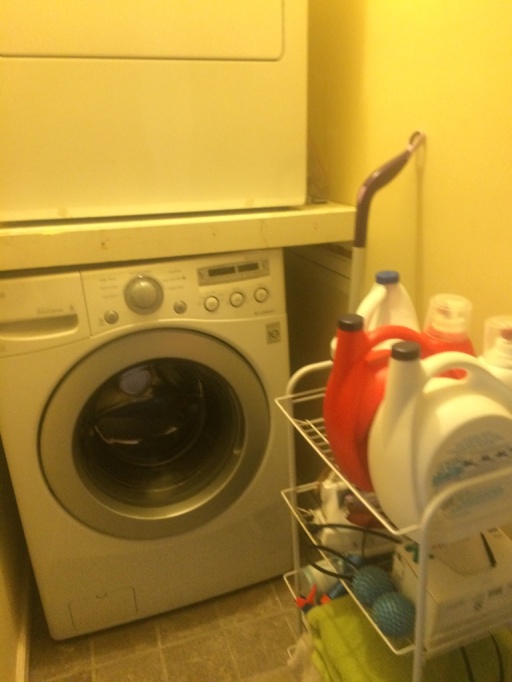 5.  No kitchen counter space-by adding a tiny table with two stools gifted to us from my mother-in-law, we were able to add an area to serve, prepare, and eat food.

When I was living in Hoboken, NJ, I was still using some of my Penn State decorations my parents had bought me.  I also had some help decorating from Home Goods.  I was able to put aside some money to add my style and get a pretty cheap white bed set with a matching white dresser and nightstand from Ikea.  Another wonderful resource was my mom and grandma, I was able to use a lot of their old kitchen flatware and dishes.  Sharing a two-bedroom, one bathroom apartment with a roommate when you’re single in a city is a lot of fun, but it’s like being in college again.  The art of stretching a dollar and making a stark apartment look decorated is truly a challenge.  I was using old tv stands from college as a makeshift bar and the plastic rolling boxes under my bed as a wardrobe for my sweaters.

Moving to Baltimore was quite a change for me, I was literally moving into a bachelor pad with my hodge podge decorations from college and my single bachelorette life.  When I moved into my fiance’s one bedroom, one bathroom apartment, we had NO SPACE.  I bought two clothes racks to put in our tiny bedroom to hang my clothes on.  I also used the nightstand drawers for my extra shirts that didn’t fit on the clothes racks.  I was lucky to still be able to fit my plastic rolling boxes under our bed.  I also used hanging shoe racks to not only hold shoes, but also my scarves and hats.  We kept my finace’s bedding, which consisted on red sheets and a gold/brown comforter on a queen bed with no headboard-yikes!  The kitchen had everything from a “man’s cave” sign to a pink spatuala.  My future mother-in-law helped us by taking some creative pictures at the Baltimore Aquarium and framing them in brown and black frames.  I used the brown framed pictures for the bathroom and the black framed pictures in the kitchen.

Going from a tiny space of merging together our styles, decorations, and clothes in Baltimore to a two bedroom two bathroom apartment in Providence was really a step-up with increased space.  The catch was-we were now doing this on ONE income!  So, time to get creative again.  I was able to take my bedding and mattress out of storage from my parents’ house in New Jersey and use it for a spare bedroom in my new apartment.  I used all of my bathroom décor from the Baltimore apartment (which was brown) and spiced it up with my turquoise decorations from my Hoboken apartment.  I also decided to turn my amazing plastic rolling boxes under our bed once again, but this time as storage for holiday gift wrapping.  I used the nightstand from Baltimore as storage in the guest room.  I was able to use the Baltimore Aquriaum pictures to decorate the bathrooms.  The black framed pictures went from the kitchen to our master bathroom.  For our master bedroom, I was able to put aside money to get a new comforter and sheet set.  However, still no money for a bed frame or headboard, so I bought some VERY cheap oversized pillows to put on the bed look as if there was a headboard.  I used my white dresser and nightstand as a base for decorating our new master bedroom.  So all I had to do was get new a new comforter that incorporated white and another matching white nightstand and ta-da the master bedroom was decorated!

In just less than three weeks, we are embarking on a new move to Pennsylvania. We have bought a house with two and a half bathrooms and four bedrooms.  We are once again going to be furnishing an entire house on ONE income.  After we move out of our current apartment, we are moving into a hotel for about a month before we get into the house.  And so the next chapter of my life begins…